Sunday, June 19, 2022, marks 157 years since, “two and a half years after President Abraham Lincoln’s historic Emancipation Proclamation, U.S. Maj. Gen. Gordon Granger issued General Order No. 3, which informed the people of Texas that all enslaved people were now free.” (National Archives). This historic day has since become known and commemorated as Juneteenth, and also Freedom Day, and Emancipation Day. Juneteenth was recognized as a federal holiday in the United States on June 17, 2021, when President Biden signed the Juneteenth National Independence Day Act, and federal employees observed the holiday for the first time two days later, on June 19, 2021.

As we remember the first Juneteenth, we explore some of the data and resources that preserve the history and experiences of former slaves and their descendants. We have highlighted several new additions to this guide. Do you know about an external resource that should be in this list? Please let us know! Thanks! 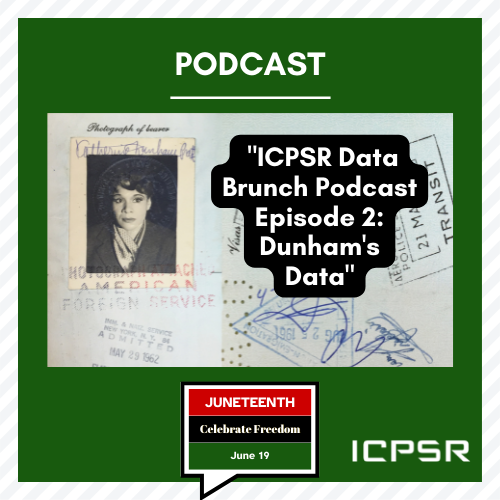 Ambyr Amen-Ra joins Data Brunch to talk about data that covers decades' worth of international travel and performances by legendary dancer, choreographer, and activist Katherine Dunham. Ambyr shares stories of the data's journey to ICPSR, as well as her own personal connection to Dunham and the communities she built. A transcript of this episode is available. 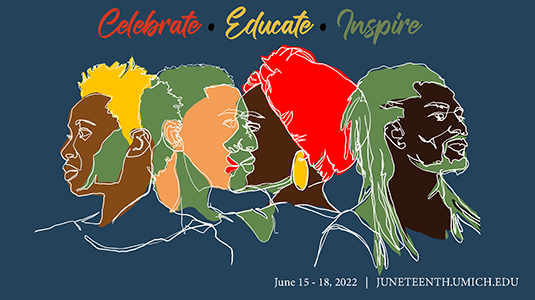 The conference features two keynote addresses. Ms. Opal Lee, “the Grandmother of Juneteenth,” will speak on Juneteenth’s journey to becoming a national holiday, and Minnijean Brown Trickey, a member of the Little Rock Nine, is in conversation with renowned journalist Roland Martin. These speakers will be joined by top scholars speaking on issues including health equity and mental wellness in the Black community, and the importance of African American institutions such as the church, fraternities, and sororities. See U-M's Juneteenth event website for more information/recordings.

From the ICPSR Bibliography of Data-Related Publications: “A Culture of Disenfranchisement: How American Slavery Continues to Affect Voting Behavior” 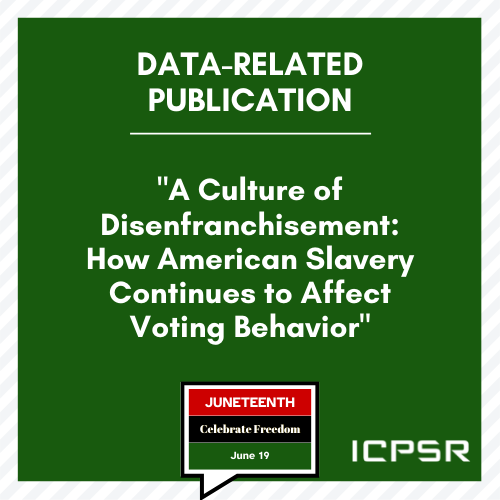 Dr. Amber Bryant (ICPSR at the University of Michigan Institute for Social Research) and Dr. Ebony McGee (Vanderbilt) discuss the inspiration and motivation behind Dr. McGee's newest book release, Black, Brown, Bruised: How Racialized STEM Education Stifles Innovation. Dr. McGee provides dynamic insight into her intentions for this book and who she hopes benefits the most. This engaging conversation is one that you won't want to miss. This book talk is hosted by the PEERS (Partnerships for Expanding Education Research in STEM) Data Hub. *NOTE: This recording is audio-only.

On Why Race Still Matters: Ontological Commitments and Researching Without Numbers (Video)

Race and racism will continue to be topics investigated by qualitative research but uncritically explored as factors impacting the inquiry process in and of itself resulting in both being largely invisible and normalized. Critical discussions of race and racism at the interstice of the inquiry process are largely absent but race still matters because we exist in an environment rife with anti-Black racism and White privilege and as human beings, we maintain ontological commitments that influence what we study and how. This session will explore the notion of ontological commitments, what they are, why we need to be attentive to them when researching without numbers. 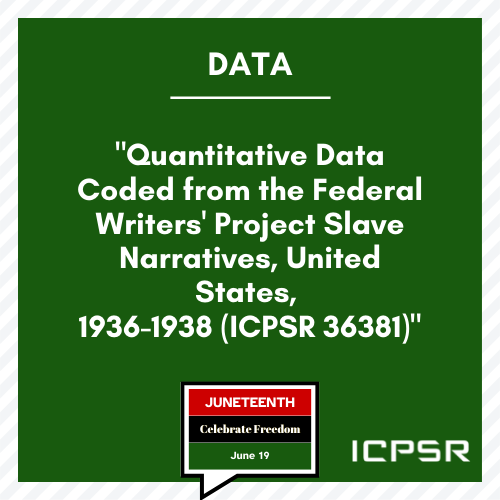 After Emancipation, did former slaves keep their names given by slave masters, or did they invent new names to go with their new lives? One of the variables in Quantitative Data Coded from the Federal Writers' Project Slave Narratives asks former slaves about their choice of names after Emancipation.

The Economics of American Negro Slavery Series was developed by Robert W. Fogel and Stanley L. Engerman at the University of Rochester with data originally obtained from the notarized bills of sale at the New Orleans Notarial Archival Office, and probate records for southern counties obtained from the Genealogical Society library of the Church of Jesus Christ of Latter-Day Saints in Salt Lake City, Utah. These data were also included in the project: "The Relative Efficiency of Slave and Free Agriculture in 1850 and 1860," funded by the National Science Foundation. Data are provided on slave sale transactions, and personal characteristics of individuals appearing in group sale transactions (wherever possible), including characteristics of one "principal slave of record," and characteristics of children sold in a group with the principal slave of record.

This study includes data on slave sales that occurred on the New Orleans slave market between 1804-1862. For each sale, information was recorded on the date of the sale, the number of slaves on the invoice, the geographical origin of the buyer and seller, the sale price, and characteristics of the slaves sold (age, sex, family relationship, and occupation). The information presented for each transaction was obtained from the notarized bills of sale in the New Orleans Notarial Archival Office. These bills often contained information on several persons who were sold in a group or as a "lot." Whenever feasible, sale and personal characteristics of individuals appearing in such groups were entered on separate records. This was usually done when separate sale prices were recorded for each member of the group. When separate prices were not recorded for children sold in a group, information describing those children was attached to the record of a principal slave with whom they were associated on the original bill of sale.

This study presents data pertaining to slave hiring transactions that occurred between 1775-1865 in eight states of the southern United States: Virginia, Maryland, North Carolina, South Carolina, Louisiana, Tennessee, Georgia, and Mississippi. The data were obtained from probate records on deposit in the Church of Jesus Christ of Latter-Day Saints Genealogical Society Library, Salt Lake City, Utah. Variables document the location of the hiring transaction and the period and rate of hire, as well as the hired slaves' age, sex, occupational skills, and condition of health. A related study is Slave Sales and Appraisals, 1775-1865 (ICPSR 7421), also prepared by Robert W. Fogel and Stanley L. Engerman.

This study presents data pertaining to slave sales and appraisals that took place from 1775 to 1865 in eight states of the southern United States: Virginia, Maryland, North Carolina, South Carolina, Louisiana, Tennessee, Georgia, and Mississippi. The data were obtained from probate records on deposit in the Church of Jesus Christ of Latter-Day Saints Genealogical Society Library, Salt Lake City, Utah. Variables document the sale locations and the appraised and sale values of the slaves, as well as the slaves' age, sex, occupational skills, and condition of health. A related study is Slave Hires, 1775-1865 (ICPSR 7422), also prepared by Robert W. Fogel and Stanley L. Engerman. 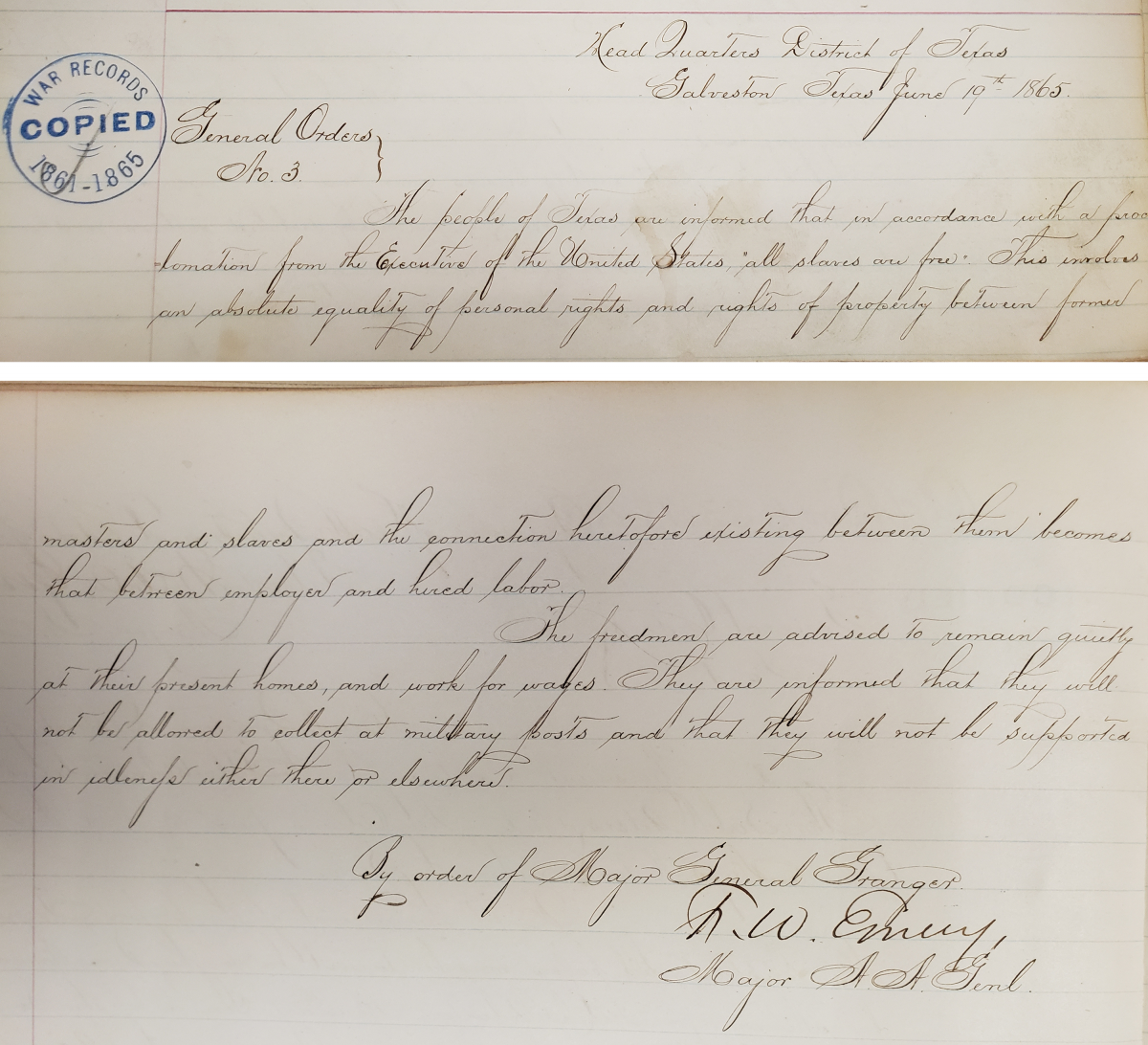 General General Order No. 3, as seen in the National Archives, informed the people of Texas that all enslaved people were now free. 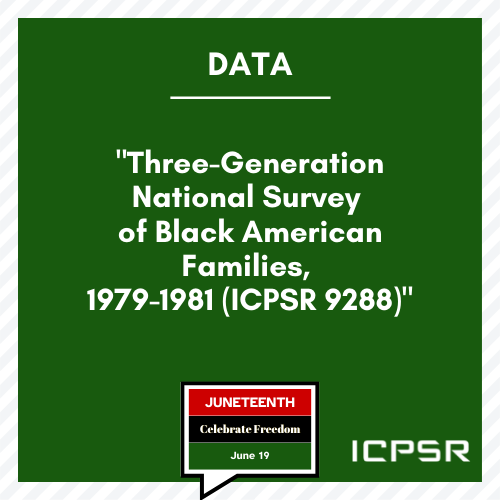 This dataset was created by merging information collected from three questionnaires that form part of the National Survey of Black Americans, 1979-1980 (ICPSR 8512) (NSBA). The three questionnaires were (1) the original cross-sectional survey questionnaire, (2) the reinterview questionnaire, and (3) the family members questionnaire. All three were administered from 1979-1981. The unit of analysis in this dataset is three generations of a family, or a "triad." Each unit or record has identical variables for the three individuals making up a triad (i.e., a grandparent, parent, and child). There are 510 triads in this dataset. The study explores feelings and attitudes across the three generations regarding neighborhood-community integration, services, crime and community contact, the role of religion and the church, physical and mental health, and self-esteem. Employment, the effects of chronic unemployment, the effects of race on the job, and interaction with family and friends are also examined. In addition, the survey provides information on racial attitudes, race identity, group stereotypes, and race ideology. Demographic variables include age, education, income, occupation, and political behavior, and affiliation.

The Resource Center for Minority Data (RCMD) provides educators, researchers, and students with data resources so that they can produce analysis of issues affecting minority populations in the United States.

The National Survey of Black Americans (NSBA) series was developed by the Program for Research on Black Americans at the Institute for Social Research, University of Michigan. It was initiated in 1977 with funding provided by the National Institute of Mental Health, Center for the Study of Minority Group Mental Health. The series was developed to address the limitations in the existing research literature on the study of Black Americans. It seeks to provide an appropriate theoretical and empirical approach to concepts, measures, and methods in the study of Black Americans. The size and representativeness of the sample permit systematic investigation of the heterogeneity of the adult Black population. The series furnishes data on major social, economic, and psychological aspects of Black American life.

Do you know about an external resource that should be in this list? Please let us know! Thanks!

Extend your research impact: Archive your Juneteenth-related research with ICPSR

Do you have data related to Juneteenth that you’d like to archive and share? Consider archiving it with ICPSR so that it may continue to answer research questions in the years to come. Visit our data deposit page for more information.